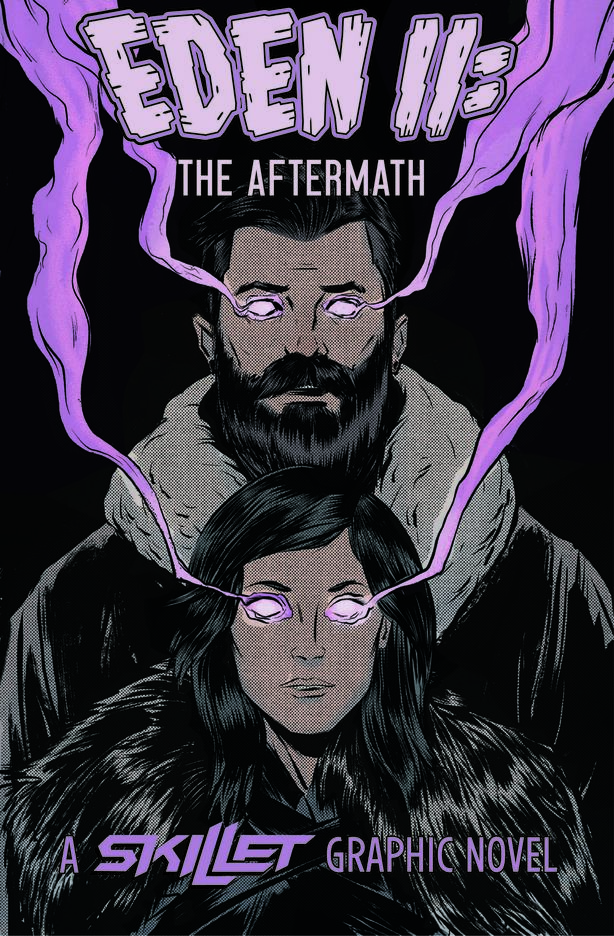 NEW YORK, NY…May 14, 2020  –Z2’s fall lineup continues to be revealed throughout the month, with some of the publisher’s most anticipated projects yet, crossing genres both musically and conceptually. Today’s announcement brings news that GRAMMY-nominated rockers Skillet will return to the post-apocalyptic world of Eden, as established in their 2019 graphic novel debut of the same name.   Loudwire unveiled the first look at cover art today with Hollywood Reporter previewing an exclusive early view of the inside pages.
“I am so excited to go back into the world of Eden,” comments lead singer and co-author John Cooper.  “Eden 2 gives us more of what we like from the first book: more action, more surprises, more suspense.”

“Working with the entire Skillet family was one of the most rewarding experiences of this past year; one of unprecedented success for our company” says Z2 publisher Josh Frankel. “The band, their fans, and the organization around all of it is unique and passionate. Their energy is infectious, insping, and comes through in everything they do. We are absolutely thrilled to be working with them again.”

Eden II: The Aftermath pairs Random Shock Studios with Skillet frontman John Cooper and his Eden artist Chris Hunt in October of this year. Two editions will again be available; both the standard and limited deluxe edition, the details of which will be revealed within the coming weeks. The deluxe edition is formatted to sit perfectly next to the previous volume on the bookshelf of every discerning rock fan or comic book reader. Both are available for preorder now through the Z2 website. Last month Skillet premiered the music video for “Save Me” on their YouTube channel, and hosted a Q&A with over 10,000 fans.  The video has already garnered 2.5  million views. While joining most of the world in isolating at home, John and Korey Cooper have also been creating some acoustic performances for their fans of late and posting them on their social accounts, including a piano version of “Anchor,” and an unplugged version of the fan favorite “Whispers in the Dark,” “Never Surrender” both of which have been incredibly popular.###
ABOUT SKILLET:
On their latest album Victorious, one of the best-selling rock bands of the 21st century, two-time GRAMMY® Award-nominated, Pandora Billionaires Club recipients, multiplatinum quartet SKILLET—John Cooper [lead vocals/bass], Korey Cooper [guitar/keys], Jen Ledger [drums/vocals], and Seth Morrison [lead guitar]—write the soundtrack to triumph. An undying spirit humbly asserted and affirmed the band as one of this generation’s most successful rock acts. However, as all classic underdog stories do, it happened quietly under the radar. By 2019, they not only garnered a pair of GRAMMY® Award nods and sold over 12 million albums worldwide, but they also took home a Billboard Music Award for the double-platinum Awake. Its breakout single “Monster” remains “one of the most-streamed rock songs of all-time” with over 3 Billion global audio streams, 295 million YouTube views and 3x platinum certification. 2016’s Unleashed bowed at #3 on the Billboard Top 200. Going #1 on Rock Radio, the lead single “Feel Invincible” cracked 150 million global audio streams and went platinum. Meanwhile, the gold-certified Unleashed became their fourth consecutive album to receive either a gold, platinum, or double-platinum status. To date, nine original tunes earned RIAA recognition in tandem with high-profile syncs by everyone from WWE and Marvel to ESPN and NFL. Between selling out arenas on four continents, the group performed on CONAN and graced the pages of USA Today and New York Times, to name a few. In 2019 alone, the band clocked over 1 billion streams. This momentum continues on their 2019 tenth full-length, Victorious. With the bulk produced by Korey and John, it lives up to its name for Skillet as their most triumphant body of work yet. On top of Victorious, Skillet debuted their first graphic novel, EDEN: A Skillet Graphic Novel with Z2 Comics, which has become the publisher’s best-selling book of all time.

About Z2 Comics:
Z2 is the premier destination for top quality music-based comics and graphic novels,
having worked across genres to deliver an authentic experience to diverse audiences.
Some of the publisher’s best-selling books include Apocrypha: The Legend of
BABYMETAL, YUNGBLUD Presents: The Twisted tales of the Ritalin Club and Eden: A Skillet Graphic Novel, alongside debut works of graphic fiction by Dan Auerbach (The Black Keys), Andy Biersack (Black Veil Brides), DJ Paul Oakenfold, internet sensation Poppy, jazz trumpeter Dave Chisholm and others. Z2’s upcoming works include boo created with partnership with The Grateful Dead, Sturgill Simpson and others.