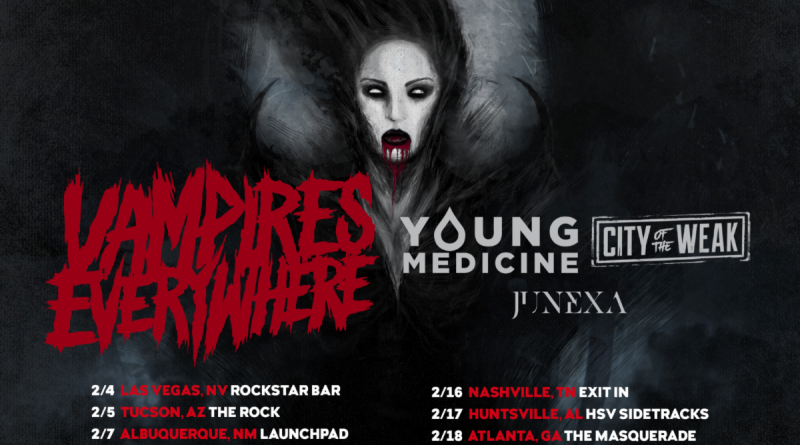 Vampires Everywhere were conceptualized in early 2010 by Michael Orlando later known as Michael Vampire. The band started its journey in Hollywood, CA-based on the idea of bringing a fresh feel to an already saturated metalcore market. Michael has been obsessed with the 1987 cult classic film “The Lost Boys” since age 13 and wanted to start a band around his love for the movie and his passion for rock music. The band quickly gained notoriety in 2010 with their debut music video for “Immortal Love” which hit half a million views and landed on the iconic MTV Headbangers Ball. A few months later VE was signed to Century Media Records and toured with Black Veil Brides on the Hot Topic Tour around the United States. The band also landed an opening spot for X Japan’s first North American run playing for over 5,000 people a night and to this day is the only band to open for X Japan in the US. After an amazing run on the 2012 Warped Tour, the band was asked by Kevin Lyman to headline Rob Zombie’s Great Adventure in Pomona, CA. Vampires Everywhere have since toured with the likes of Motionless In White, AIDEN, Alesana, Orgy, Filter, Falling In Reverse, and countless others. Stay tuned for more Vampires Everywhere news coming soon.