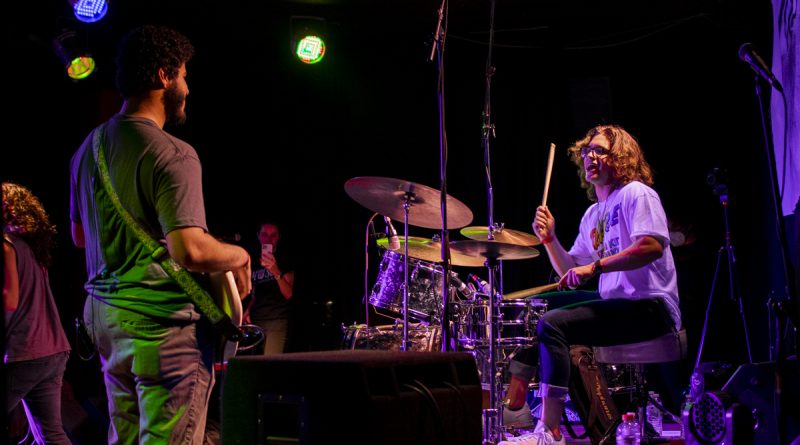 Last night; joined by supporting acts Manic and Northy, The Retrograde brought their first album to life in front of a packed house at Tallahassee’s Warrior On The River.

Throughout the entire performance the speakers were filled with warm, punchy guitar tones, rock and roll drums, and a smooth, groovy set of bass lines. At back of stage, Drummer Carson Degner played two full sets playing not only with The Retrograde but pulling off a short notice fill in for metal driven opener Manic. Both performances were delivered using a hard driving, lively, rock and roll style for which Degner has become known.

At side stage Bassist Josiah Pye kept the groove moving for the entire set which included not only the entirety of The Retrograde’s newest offering but a great mix of covers such as Jett’s “Cold Hard Bitch”. Never seeming to break a sweat Pye effortlessly kept each song moving like it had a life of its own.

Front and center of course was lead singer and guitarist Joey Fox. On both accounts Joey was spot on, bringing the gritty, punchy perfection The Retrograde is known for. With both a vocal and guitar style that could easily lead the unknowing to think they were listening to Led Zeppelin it is undeniable that Fox is capable of channeling the energy of great front men of the past.

Supporting act Manic opened the show and kicked things off with a hard charging thrash/punk sound which easily got a fresh crowd on their feet and up front. In their mix was also a heavy prog influence that definitely harkened to great bands such as TOOL. Filling in on drums, The Retrograde drummer Carson Degner showed off his ability to learn on short notice, delivering a hard hitting performance to give Manic fans the show they wanted!

Closing the show, the always popular Northy demonstrated that their quick rise as fan favorites is not unwarranted. Holding a major portion of the crowd for their show after The Retrograde’s headlining set. Northy has put together an awesome mix or originals and covers, all of which seem to draw any crowd in and have them singing along.

The Retrograde’s new self titled album is available now anywhere you stream music! Bringing the classic rock sounds of the past to a new generation in a new way! You can also find The Retrograde on Instagram and Facebook!