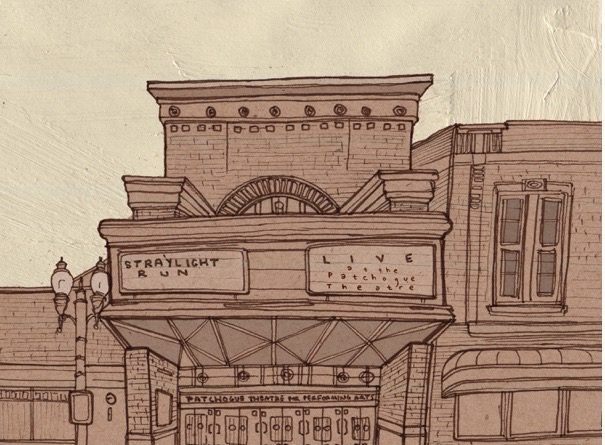 The 16-song recording, which marks the band’s only live album, will be available for the first time in its entirety and features such fan favorites as
“Existentialism on Prom Night,” “The Tension and the Terror,” and “Hands in the Sky (Big Shot)”

Craft Recordings is thrilled to announce Straylight Run‘s Live at the Patchogue Theatre — the band’s only live album, captured at the height of their success in 2005…and then shelved for 15 years.

While a handful of tracks from the performance were shared in 2020 as a Bandcamp exclusive, the forthcoming release will now include the full 16-song set and will be available for fans to enjoy on CD, vinyl, and across all digital platforms. A special edition of the 2-LP set —pressed on red marble vinyl and limited to 500 units — will also be sold exclusively on the band’s webstore. All formats can be pre-ordered today, while the advance single “Existentialism on Prom Night (Live At The Patchogue Theatre, Long Island, NY/2005)” is available to stream or download now.

Originally formed in 2003 by Taking Back Sunday’s John Nolan (vocals, piano, guitar) and Shaun Cooper (bass), Straylight Run marked a sonic departure for the artists, who opted for reflective, indie rock songs over the heavier material that they were known for. Nolan and Cooper were soon joined by drummer Will Noon (formerly of Breaking Pangaea) and singer, guitarist, and pianist Michelle DaRosa.

Straylight Run released their self-titled debut in 2004 through Victory Records, earning critical acclaim and a Top 5 spot on Billboard’s
Independent Albums chart. A year later, they followed with their EP, Prepare to Be Wrong. During this time, the band stayed busy on the road, supporting acts like Coheed and Cambria, The Used, and Motion City Soundtrack, as well as headlining the Vans Warped Tour.

In 2005, the band booked a hometown concert at Long Island’s Patchogue Theatre to raise funds for a friend in need. Aiming to release a live DVD, they filmed and recorded the show. In a statement, Nolan recalled that “the feeling in the room and on stage that night was incredible… Unfortunately, the footage ended up being unusable, so plans for the DVD were scrapped. The audio from the show sounded great, but at the time we were getting ready to release our first EP, so putting out a live album at the same time didn’t make sense.”

He continued, “We didn’t know what to do with the recording, so it stayed on the shelf with the idea in the back of our minds that we’d release it someday.” In April 2020, the band shared ten of those songs on Bandcamp — donating 100% of proceeds to Feeding America — and reunited for a one-off livestream performance. Now, with the full release of Live at the Patchogue Theatre, fans can enjoy the only live recordings of songs from Straylight Run and Prepare to Be Wrong, including such favorites as “Existentialism on Prom Night,” “The Tension and the Terror,” and “Hands in the Sky (Big Shot).”

After that evening, Straylight Run went on to release one more album (2007’s The Needles the Space) as well as three more EPs before announcing an indefinite hiatus in 2010. That same year, Nolan and Cooper resumed their work with Taking Back Sunday. Today, they continue to record and tour with the best-selling alt-rock band. DaRosa, meanwhile, went on to form the band Destry with Cooper, along with members of The Format and Cassino. Will Noon played drums with the best-selling group, fun., and is currently one half of the Los Angeles-based duo Mourners.

Click here to pre-order/pre-save Live at The Patchogue Theatre.

SIDE A:
1. Introduction
2. Mistakes We Knew We Were Making
3. Tool Sheds And Hot Tubs
4. It’s For The Best
5. The Perfect Ending

SIDE B:
1. Another Word For Desperate
2. Sympathy For The Martyr
3. The Tension And The Terror

SIDE D:
1. Later That Year
2. Hands In the Sky (Big Shot)
3. A Slow Descent
4. Existentialism On Prom Night

1. Introduction
2. Mistakes We Knew We Were Making
3. Tool Sheds And Hot Tubs
4. It’s For The Best
5. The Perfect Ending
6. Another Word For Desperate
7. Sympathy For The Martyr
8. The Tension And The Terror
9. Now It’s Done
10. Your Name Here (Sunrise Highway)
11. Dignity and Money
12. It Never Gets Easier
13. Later That Year
14. Hands In the Sky (Big Shot)
15. A Slow Descent
16. Existentialism On Prom Night

ABOUT CRAFT RECORDINGS:
Craft Recordings is home to one of the largest and most essential collections of master recordings and compositions in the world. Its storied repertoire includes landmark releases from icons such as Joan Baez, John Coltrane, Creedence Clearwater Revival, Celia Cruz, Miles Davis, Isaac Hayes, John Lee Hooker, Little Richard, R.E.M., Joan Sebastian, and Traveling Wilburys. Plus, the catalog recordings of celebrated contemporary acts including A Day to Remember, Evanescence, Alison Krauss, Nine Inch Nails, Taking Back Sunday and Violent Femmes, to name just a few. Renowned imprints with catalogs issued under the Craft banner include Fania, Fantasy, Fearless, Musart, Nitro, Panart, Prestige, Riverside, Rounder, Specialty, Stax, Vanguard, Varèse Sarabande, Vee-Jay and Victory, among many others. Craft creates thoughtfully curated packages, with a meticulous devotion to quality and a commitment to preservation—ensuring that these recordings endure for new generations to discover. Craft is also home to the Billie Holiday and Tammy Wynette estates which preserve and protect their respective names, likeness and music through day-to-day legacy management of these cultural trailblazers.