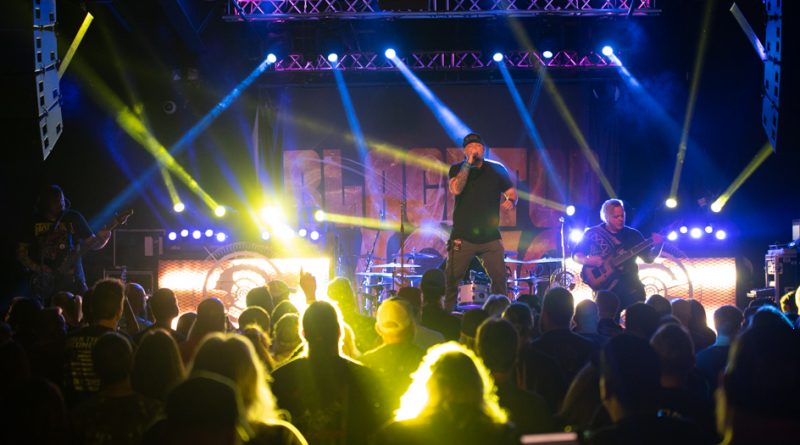 Formed by brothers Blake and Zach Bedsaul in 2007 SAUL gained major notoriety in 2019 when their song Brother became a song in regular rotation on Sirius XM Octane Test Drive which peaked at number 20 on the billboard top 40. With 3 Ep’s and a studio album under their belt the latest being Rise as equals the band has hit the road touring to promote the album.

With hard hitting songs like looking to fight and the self titled Rise as equals we were excited to be able to catch the band as they toured as direct support for Nonpoint with Blacktop Mojo.

Doors opened at 6pm at Rock Destin and judging by the crowd waiting to get thru the doors people were happy to get back to some normalcy in their lives and to see live music again after being locked up for so long during the pandemic. Tallahassee locals Tragic started out the night with a solid set.

By the time Saul took to the stage shortly after a change over Rock Destin was at capacity for this sold out show , having just heard the band on youtube I wasn’t quite sure what to expect when they hit the stage , but it was obvious most of the crowd already knew who these guys were.

With lots of energy and drive I have to say that Blake , Myles , Zach and William were no strangers to a stage and knew just how to deliver to the crowd what they were looking for when it comes to a rock show.

It was great seeing the fan interaction as they sang along with the band to songs like King of misery , Looking to fight , Brother and Rise as equals. If you have never heard of or seen Saul I highly recommend checking out their music and if you have a chance to see them live do not pass it up , you will not be disappointed. The band even took time to talk with fans at their merch table after the show which in my mind is great because its something that they will remember for a long time that they were important enough for the band to acknowledge them.