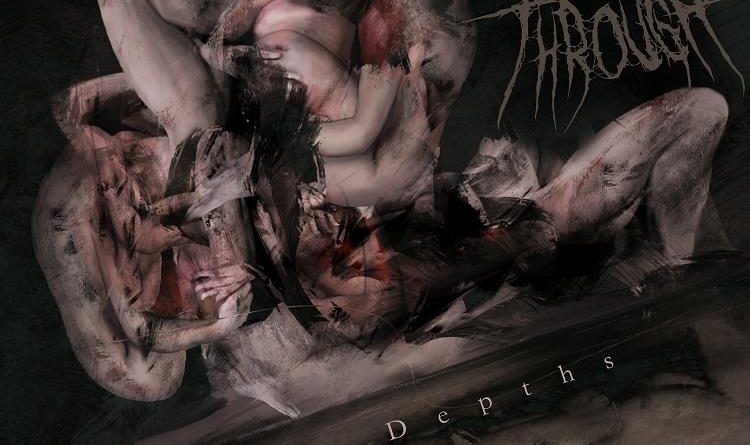 ROTTED THROUGH Unleashes Horrific Death Metal on New Album, /the_Depths, Available Today
Preview the Carnage that is /the_Depths with “To Stretch… to Tear…”

Only the New England woods, shrouded in mystery and damned for its infamous witch trials – could inspire the brutal, horror-infused death metal created by ROTTED THROUGH on their debut album, /the_Depths.
Macabre. Arousing. Vicious. The three-piece group crafts a labyrinth of sound that leaves the listener with no compass, light or rope. ROTTED THROUGH focuses on crafting cohesive, themed records to develop their own horror story. Every detail is deliberate. Listeners will find new traps, pitfalls and snakes coiled to strike each time they dare to delve into the catacombs with ROTTED THROUGH. It’s not often that the “theme” of a band is equally important as a band’s music, but for ROTTED THROUGH, it’s an entire package.
“For me, I’m a writer first,” says Goncalves. “I try to create almost lore-level depth to a project. I do countless hours of research about the horror story I want to tell and insist on themes and songs that fit the premise. I wrote this as the pseudo story of an anti-protagonist spiraling further and further down into the most abhorrent content ever created. I wrote the last song, which is also the darkest song, first and then returned to the top, trying to work out just how the hell someone ends up down there.”
Guitars/bassist/drummer Russell adds, “I couldn’t even give you a band we sound like. What’s weird is the themes give us our own little unique style, so what the hell would you call that…themed death metal?”
/the_Depths, out today, is available now at https://rottedthrough.bandcamp.com/releases and via Spotify. For a preview of the carnage that is /the_Depths, check out the video for the first single, “To Stretch… to Tear…”
Although ROTTED THROUGH may sound like a stampede of zombies, in reality it is merely three longtime friends from New England. In classic heavy metal-kid style, the original duo of Goncalves and guitarist Armando Imbro met in a mosh pit in their early teens. Imbro later introduced his friend Paris Russell, but Goncalves was not immediately sold.
“I tried to avoid him at first,” Goncalves laughs. “Paris was an alternative school kid, classic delinquent. Mondo assured me he wouldn’t stab or rob us, so we picked him up and right away he fit like a glove. We’ve played together ever since, through lineup changes, different band names and concepts, even a hiatus or two, it’s been us three from the beginning.”
Beginning as a thrash metal band, ROTTED THROUGH eventually morphed into the techno-death, horror-groove collective they are today. “We’re fast paced, big on tension and release, and we like complex rhythms,” Imbro says. “I like to use a lot of tails and runs to spice- up riffs and Paris does weird timing stuff a lot, it’s cool.”
Goncalves adds, “Musically, the guys killed it by somehow making the album super progressive, ditching traditional song structure and opting for an audio voyage, yet kept it grounded with badass grooves. It’s heavy metal Frankenstein: body of death, arms of groove, one leg progressive, the other leg thrash, one tech eye and a horrific rotted through face. My style is to separate vocal patterns. I treat each voice as its own vocalist. In keeping with the theme of descent, the lead vocals start as high-end screeching and by the end of the record, they’re mic engulfing bellows.”
/the_Depths track listing:1.      Infinite_depths2.      What Does / B / Keep In The Freezer?3.      Tor.ist4.      The Silk_en Road  5.      .human Experiments6.      Vile_encryption7.      “Foul Enough to Eat”8.      To Stretch… to Tear…9.      /red/room10.  That Which Is Abysmal
ROTTED THROUGH online:Armando Imbro – Guitars  Paris Russell – Guitars, Bass Guitar, Synthesizer, Drum Midi Mike Goncalves – Vocals
ROTTED THROUGH online:https://rottedthrough.comwww.facebook.com/rottedthrough/www.instagram.com/rottedthrough/https://twitter.com/rottedthrough