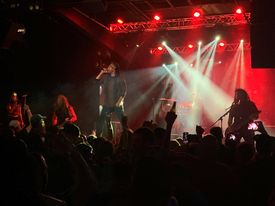 In 1997 two guys Elias Soriano and Robb Rivera put together one of the most bad ass bands known today NONPOINT , which got its name from a song by a band called Believer . After that the band never looked back as they went on to release 12 albums between 1997 and 2018. With big hits like Bullet with a name , Miracle and what a day when nonpoint took to the stage no matter what city they were in bodies were moving.

Enter 2021 and we have the I’m about to Explode tour with new songs like Ruthless and the fan chosen cover of when doves cry. The band proved they still have what it takes to kick ass and take names afterwards. Even with the departure of BC Kochmit and a recent accident that made them have to reschedule some of their dates the band never waivered from pushing that envelope of go hard or go home.

When i found out there was only one date in my area (Florida) I knew I had to get tickets to see them the day they went on sale. Got to venue hoping to be able to say hi to the guys as I always did when they came to Floyds music store when it was open in Tallahassee Florida, but with recent events surrounding covid-19 the band took precautions and wasn’t doing meet and greets or allowing media in the pit which was totally understandable.

When we arrived at the venue we could see Robb in the parking lot doing a live blog as the local helicopter tour flew loudly over the venue.

Around 10 pm The band took to the stage to a sold out crowd ,you could tell by the smiles on the guys faces they were very happy to be back at doing what they enjoyed , playing to their fans both die hard and new. The night started out with What a day and went straight into Victime / hive , Elias couldn’t help but chesse ( big ole grin) hearing every one srceam F@ck that during the songs verse . He took the time to talk to the crowd in between songs about what the band had been up to while in lock down besides going crazy and introduced the newest member of the bad Jaysin. I have to admit even after 10 years of being a fan of this band I still felt like a little kid going to my first concert ever and singing at the top of my lungs every song I knew . The set was definitely solid for being back on the road and included fan favorites like Alive and kicking In the air Tonight and Bullet with a name on it. But I honestly believe every one went nuts when they did the cover of When doves cry. Though we did not get to photo this go round of the tour we hope that the next go around brings them back to Florida (hopefully closer than a 4 hour drive) totally worth it In my opinion, we will. If your a long time fan of Nonpoint or just learning who they are be sure to check out this tour .