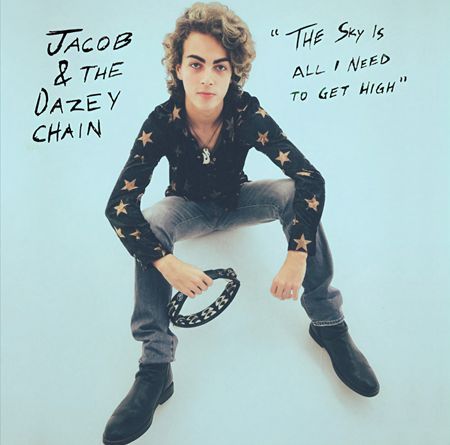 Brit Pop/Rock-influenced guitarist, singer and songwriter JACOB REESE THORNTON of JACOB & THE DAZEY CHAIN announces today’s release (October 21) of the fourth single and title track of the EP “The Sky Is All I Need To Get High” on indie label Gratuitous Noise. The new single was written by JACOB REESE THORNTON and as with many of his self-written songs, they’re inspired by his longtime musical influences (R.E.M., Oasis, Lindsey Buckingham and Fleetwood Mac). “The Sky Is All I Need To Get High” was co-produced with Bill Reynolds (Band of Horses), who also played bass. All the vocals and guitars were performed by JACOB, with Rami Jaffee (Foo Fighters) on B3 organ, and Jerry Roe (Legendary Shack Shakers) on drums. Jason Kingsland engineered and mixed the track with mastering by Frank Arkwright at Abbey Road. The B-side “Sketches Of You” accompanies the single release. LISTEN HERE to the single and the B-side available now on all streaming platforms. Watch the YouTubevisualizer video for the single HERE