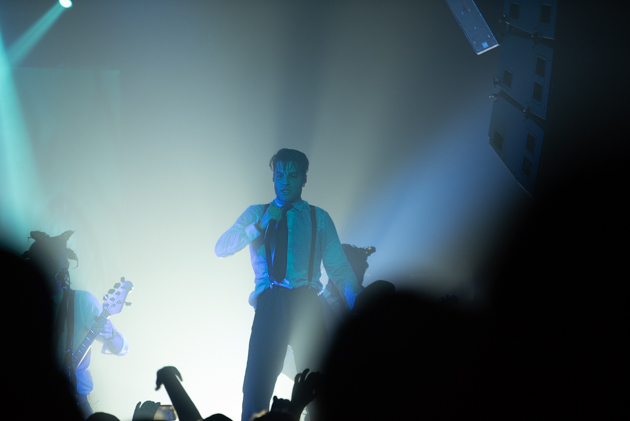 Fearless records artist Ice Nine kills heavy metal band out of Boston Mass played at Rock Destin this past weekend in support of their latest album The Silver Scream 2 Welcome to Horrorwood that was released on October 15 2021. The band was formed by high school friends  Spencer Charnas and Jeremy Schwartz in early 2000 and is well known for their horror inspired lyrics. With an impressive 3 EP’s and 6 full length studio albums under their belts , Ice nine kills continues to please the masses with their hard hitting melodic and heavy lyric songs. Even in videos Spencer delivers the full effect of horror that fans of Ice Nine Kills enjoy.

Rock Destin is a venue I’m very familiar with as I’ve shot (photographed) quite a few national bands here as well as being a tour photographer for bands local to my area. Ice nine kills had a stellar opening line up for this date with Bad Omens and Currents getting the crowd pumped before taking the stage.

With 600 strong (a sold out crowd) Spencer took to the stage around 10:30 for Opening Night before being joined on the stage when they went into Welcome to Horrorwood . I got to admit it was great being back at a show of this caliber after not having shows for almost a year and a half , with a lot of bands still not issuing credentials to photographers.

The rest of the night had 15 more songs for the masses including Savages , stabbing in the dark , ex-mortis and rainy day to name a few. And of course the theatrics that go with each song was no disappointment at all. a few hard core fans even came dressed in their favorite horror movie characters including Pennywise , Scream and Jason. Unfortunately a few fans passed out and didn’t make it for the opening acts rather alone the main event of Ice Nine Kills. Talking to some of those in attendance out side some people drove over 9 hours just to see the show , I think that in it self speaks volumes on the dedication of this bands following.