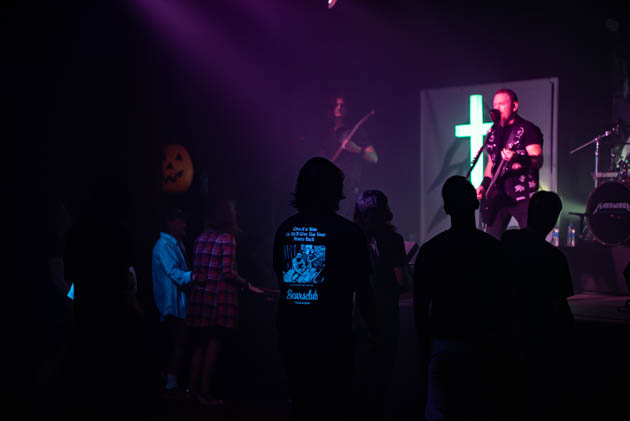 As a man whose very first live show was Metallica at age 12, I’m somewhat of an aficionado. Having made live shows my lifestyle, I’ve also seen a tribute show or two. In my experience, a band would not go so far as to make their entire live experience a tribute to the gods if they couldn’t back it up and Hardwired is no exception. In fact, I’d call it exceptional. Diving into the crate and playing the favorites, exactly as you’d want to hear them- perfect solos, the trademark “YEAH”, staying away from the Load to Death Magnetic era – with the exception of The Memory Remains – there was Justice For All. I had my reservations because Metallica is as dearly beloved to me as Prince was for my mother. And the Metallica Master of Puppets cassette tape was her “life-changer” in school. Without that tape being handed to her, I wouldn’t have been singing Fade To Black coming home from daycare. Again, I’m what one may call an aficionado. If first impressions are everything, color me impressed.

With a name like Hardwired, it was no surprise that they started the show with that title track. It ripped, not only musically, it set the tone that Chris, the vocalist and guitarist, had the chops one needs to do justice to James Hetfield. Take it back in time a notch with The Memory Remains, followed by Creeping Death, and you knew then that Hardwired was here to chew bubblegum and throw down… and they were all out of bubblegum.

The set was a perfect two and a half hours of nonstop happiness, both from the stage and in the crowd. More than once I heard, “dude this is the most perfect night” and knowing that at least one person in the crowd felt that way is what makes live music one of the best things this world can offer. Seeing songs you’ve known and loved performed live, by real people who enjoy what they’re doing, is sublime. It gives a respect to the idea of the tribute that is too often overlooked. The drummer, Sean, and the singer, Chris have been making music together for 7 years and that chemistry is one of the things that a musician loves and a fan feels in their core.

I took my chance to hop onstage after the show as they were breaking down their gear with the intent of asking everyone one direct question and it turned into hanging out with this lovely group of dudes for almost an hour. When asked if there were any other icons Chris could give a run for their money, I was surprised to hear him say he’d never really tried. “I’ve always been the one doing backup vocals, and usually in a higher register than James sings in, training my voice to get the range James has… you don’t really know how integrated his voice is with the whole production of all the music until you get in there and play it all together.  His range, with that gravelly tone, is really a lot more than I think most fans realize or appreciate and when people tell me how good it sounds after the shows, it’s really humbling.” Bassist, Steve, is the kind of skilled wizard that comes from honing his craft since Cliff Burton still lived and breathed. “Cliff was definitely an idol of mine but I have to give credit to Steve Harris of Iron Maiden for the speed and triplets that Cliff used. Those guys were really paving the way at that time and I watched the videos as much as I could.” Watching Steve lead off For Whom The Bell Tolls was a moment I waited for with much anticipation and the man nailed it. One of the more memorable experiences, though, was watching Joe shred through the Fade To Black solo like he was the one that wrote it. Not a single note missed, not a single beat off, he played like he was born to it. Elsewhere in the set I noticed him take a note straight from the one and only Dimebag Darrell, pulling off a guitar squeal that would open the Cemetary Gates. Consider the goblet of rock raised, cheered, and slammed down. My highlight from Sean, with whom I talked to more than anyone, was that Hardwired has only been together since September of last year, playing their first show that December and that two of them live in Tampa while the other two live in South Florida. With that level of long-distance, I had to express my shock that they gel so well with one another. “When you have a group of people that truly are all in it for the same purpose, the rest falls into place however it needs to. We’re all dedicated to what we want to do, sometimes Steve and Joe come up to Tampa for practice, Chris and I make trips down there… we’ll all agree on a song to practice for a week, find a way to get up and jam it out together, and it just works.”

The level of cohesion is palpable, and one can easily tell these men do more than mesh, they seek and they destroy. Hit the lights, and welcome home the four horsemen. Puns aside, Hardwired is a band you don’t want to miss if they come anywhere close, and after seeing them pull off such an enjoyable and energy-ridden performance… I know they’ll be going far.