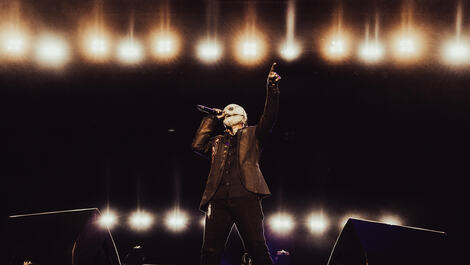 Celebrates The Return Of Live Music This Fall With Series

Of Record-Breaking Festivals Including

Biggest Crowd Ever For Louder Than Life (Louisville, KY)

And Sold Out Events Aftershock (Sacramento, CA) And

With Metallica, Slipknot, Disturbed & Many More

Will Be Livestreamed From Welcome To Rockville At twitch.tv/dwpresents

America’s largest independent festival producer Danny Wimmer Presents launched the 2021 music festival season this fall with a series of memorable, record-breaking events that will culminate in less than one month at Welcome To Rockville, November 11-14 at Daytona International Speedway in Daytona Beach, FL. This massive rock n’ roll finale will feature can’t-miss sets from Metallica (two unique sets over two nights), Slipknot, Rob Zombie, Disturbed, Lynyrd Skynyrd (in their last North Florida performance), A Day To Remember, The Offspring and many more.

Welcome To Rockville continues DWP’s celebration of the return of live music in 2021, following the biggest crowd ever for Louder Than Life in Louisville, KY (160,000) as well as sold-out events for Aftershock (145,000) in Sacramento, CA and Inkcarceration Music & Tattoo Festival (75,000) in Mansfield, OH.

Florida’s Biggest Rock Experience will also feature a main stage performance from the “Battle For The Big Stage: Road To Rockville Edition” winner Whit3 Collr. They beat out thousands of hopeful contenders as part of the virtual competition hosted by “That Space Zebra Show” on DWPresents Twitch channel, where tens of thousands of fans voted for their favorite artists in real time each week.

“When we announced our fall festivals for this year, we could already sense the excitement, we knew how eager bands were to get back on stage, and how long fans had been waiting for something to celebrate. But these festivals have been on another level,” says DWP Founder Danny Wimmer. “Nobody’s taking anything for granted, everyone is giving 110%. There’s something special happening, not just with the bands’ performances, but the energy that the crowds are giving back. The rock n’ roll spirit is bigger than I’ve ever felt it. Welcome To Rockville is the grand finale of our festival season, and as a fan I can’t wait to feel that energy one more time in 2021.”

Fans from around the world can tune in to “That Space Zebra Show” hosted on DWPresents Twitch channel (https://www.twitch.tv/dwpresents) during Welcome To Rockville for select livestreamed performances, exclusive interviews and behind-the-scenes content. “That Space Zebra Show” on DWPresents Twitch logged over 1 million live views for DWP’s first three festival streams (Inkcarceration, Louder Than Life, Aftershock) leading up to the Welcome To Rockville finale.

In addition, DWP has just announced the Welcome To Rockville Campground Stage with nightly performances for campers-only after the main stage performances wrap each night from Thursday through Saturday, as well as a campground kick-off party on Wednesday. The Campground Stage music lineup will be announced early next week. Festival and camping passes are on sale now at https://welcometorockvillefestival.com/.

Those attending Welcome To Rockville in-person will also be the first to learn the 2022 headliners for WTR as the announces will happen from the festival each night.

The 2022 DWP festival calendar as of now includes:

Welcome To Rockville (https://welcometorockvillefestival.com): May 19-22, 2022

2022 passes for Inkcarceration, Louder Than Life, Aftershock and Welcome To Rockville are available now for just $10 – $22 down, for a limited time.

Here are some highlights from DWP’s 2021 festivals so far:

Inkcarceration Music & Tattoo Festival set a new record with 75,000 music fans rocking out at the sold-out September 10-12 event on the historic grounds of The Ohio State Reformatory in Mansfield, Ohio – a site made famous by the movie The Shawshank Redemption. Inkcarceration featured a massive lineup with some of the biggest names and brightest new stars in rock and metal, including headliners Slipknot, Rob Zombie and Mudvayne (in their first show in over 10 years), as well as A Day To Remember, Mastodon, Halestorm, Chevelle, Killswitch Engage, Beartooth, Motionless In White, Steel Panther, Fever 333, The Hu, Pop Evil and many more. In addition to the diverse music lineup, the festival featured more than 50 tattoo artists, nightly tattoo competitions, and tours of the famous Ohio State Reformatory prison. Said Mansfield News-Journal of the weekend, “Ink [was] flowing, metal roaring again with Inkcarceration at Ohio State Reformatory.”

Louder Than Life, America’s Biggest Rock Festival, made its triumphant return in Louisville, Kentucky September 23, 24, 25 & 26with a record-setting attendance of 160,000 people who enjoyed the expanded four-day weekend. The sixth edition of Louder Than Life featured a massive and eclectic music lineup, with Metallica (two nights / two unique sets), Disturbed and Korn in headlining performances. There were several other important milestones throughout the festival weekend including Judas Priest making a stop on their 50th anniversary tour, Anthrax celebrating 40 years and Machine Gun Kelly playing tracks from his album Tickets To My Downfall on the one-year-to-the-day anniversary of the album’s release. In addition, festivalgoers were able to enjoy award-winning bourbons, whiskey, spirits, craft beer, and the best food Louisville has to offer. Said Courier Journal of the weekend, “It’s back and it’s amazing.” While LEO Weekly contemplated, “How will DWP top this for Louder Than Life 2022? I don’t know, but I’m looking forward to seeing you all there again for it.”

One of the largest events to be held in Sacramento, California in two years, Aftershock returned to Discovery Park October 7-10 with a memorable four-day weekend, welcoming a record-setting attendance of 145,000 fans and retaining its title as the West Coast’s Biggest Rock Festival. Metal giants Metallica continued their partnership with DWP at Aftershock, delivering an incredible two unique sets over two nights including hits from the band’s 40-year catalogue, as well as playing Metallica (The Black Album) in full from back to front in honor of the record’s 30th anniversary. Other memorable moments at the 9th edition of Aftershock included a headlining appearance from The Original Misfits, who helped usher in the Halloween season with a rousing horror-punk performance on Saturday night, as well as a Thursday closing set from Cypress Hill. The diverse Aftershock 2021 lineup also included Anthrax, Rancid, The Offspring, Social Distortion, Rise Against, Volbeat, Machine Gun Kelly, Mastodon, Gojira, Seether, Mudvayne, Testament, Dropkick Murphys, Pennywise, Mammoth WVH and many more.

Sacramento Bee said, “The return of the Aftershock Festival following a 2020 hiatus due to the COVID-19 pandemic is one of the country’s most anticipated hard rock events this year…Aftershock is also music to the ears of civic and tourism officials who are eager for a much needed economic boost.” Elsewhere, East Bay Express and San Jose Mercury News said Aftershock has “become the place to be for headbangers over the years, annually offering up the best that these heavy music genres have to offer.”

(Slipknot at Inkcarceration by Steve Thrasher)

(Mudvayne at Inkcarceration by Steve Thrasher)

(Louder Than Life by Nathan Zucker)

(Metallica at Louder Than Life by Steve Thrasher)

(Korn at Louder Than Life by Steve Thrasher)

(The Original Misfits at Aftershock by Steve Thrasher)

(Rise Against at Aftershock by Steve Thrasher)

​​About Danny Wimmer Presents: Since 1995, music industry veteran Danny Wimmer has been producing concerts and festivals, both large and small. In 2011, he formed Danny Wimmer Presents, which now produces several of the largest rock and alternative festivals in the U.S. By combining A-list talent with local cuisine and culture, DWP has become recognized within the industry for delivering the highest-quality entertainment experiences to fans, artists, sponsors, partners and host cities. DWP creates memorable and all-encompassing festival experiences, leaving both consumers and partners with lasting and meaningful impressions. DWP will continue to add new music festivals to its already stellar portfolio, which currently includes Aftershock, Bourbon & Beyond, Epicenter, Hometown Rising, Inkcarceration Music & Tattoo Festival, Louder Than Life, Sonic Temple Art + Music Festival, and Welcome To Rockville. Previous DWP festivals include Rock On The Range, Carolina Rebellion, Northern Invasion and more.  In 2020, DWP launched the popular digital series Offstage with DWP and Beyond the Barrel, and ventured into the digital content curation space, promoting pay-per-view live streams.