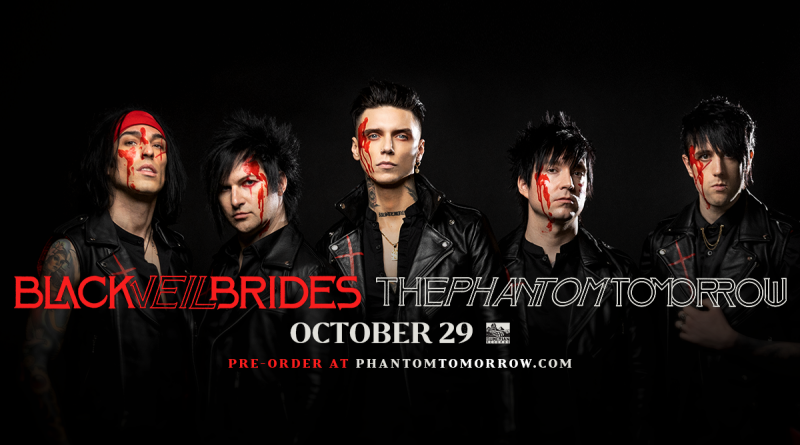 Calling all disenfranchised, all lost, all misfits and every person in between: Black Veil Brides returns with The Phantom Tomorrow, a concept album packing more than a few surprises from the mind of vocalist Andy Biersack. Created in 2009, BVB has done nothing but outdo themselves time and time again. Stepping on the scene with a giant pair of boots and an attitude bent on using them, their first album sold 10,000 copies its first week out, coming in at no. 36 on the Billboard Top 200. Six albums later, tour after tour with myriad juggernauts and packed out crowds, to say Phantom is highly anticipated would be an understatement of the gravest proportions.

Though not the first concept album in their catalog, it tells a gripping cinematic story with the solidarity they’re known for and songs meant to be enjoyed by the largest crowds possible. The use of strings never fails to give the audio a massive theatricality and this is fully realized from the beginning intro track, titular The Phantom Tomorrow, and on through tracks such as Shadows Rise, The Wicked One, and the interlude Spectres.  It’s a small element to some, sure, but it’s those things that give this album that overarching feel, the feel of something monumental. Providing his stringwork in the past for Brides and acts such as September Mourning, Marty Friedman, and others still, the work of Jeremy “Jinxx” Ferguson never fails to impress. The structures of the songs, melodies, and harmonies become to the ear a tapestry spun with a fine hand (or hands, rather).

Accompanying this monumental album is a six-part series of comic books written and published by the joint team of Incendium and Opus, known for their love of monsters, mythology, and, of course, heavy metal. Biersack says of the partnership, “we are so excited to release this series and build on the world that we have developed for Blackbird, 9, Scarlet, and the entire Phantom Tomorrow universe that BVB fans have come to know over the past year via our music videos and other visual mediums.” He continues, “I believe that in Michael Moreci we have found the perfect writer and collaborator and the partnership with Incendium is an ideal match to deliver rock and comic fans a memorable character-driven experience. We believe this book will serve as an excellent companion to our upcoming album and helps us to fully tell the story of The Phantom Tomorrow.” Below is a video posted by Biersack in May of this year detailing the band’s reasons for delays, both including and past the pandemic, that sheds some light and shares copious amounts of thanks for the band’s fans around the world.

Of that story, teases and excerpts over the past year have given some insight but Biersack summarizes it thusly with, “[Phantom] follows Dennis Kane, a scientist with an intellect matched only by his massive ego. When his hubris causes the world to fall apart around him, a dark avenger is born of his agonizing shame. Resurrected as Blackbird – a mysterious figure caught between life and death – he desperately seeks redemption, willing to fight through hell and back to get it. The Blackbird’s quest becomes a beacon of hope to the downtrodden, and their uprising is coming.” Following their goal as a band from the jump by combining true blue hard rock and roll with a note of positivity aimed at those of us who have ever felt without a place to call our own, it carries a poeticism that transcends and transforms the listener.

Black Veil Brides has always fought to show through their music that those of us listeners who felt alone, or even “downtrodden”, that there was a place to turn instead of the dead end. An entity to light the path of loneliness. Channeling the gods of rock through everything from outfits and stage personas, to the rifftastic and pummeling, powerful music, BVB is lead guitarist Jake Pitts, rhythm guitar and violinist Jeremy “Jinxx” Ferguson, bass guitarist Lonny Eagleton, drummer Christian “CC” Coma, and aforementioned creative extraordinaire Andy Biersack. This album sees every member shine their own light through the depths of darkness with professionalism and ease that comes from a true belief in what they do. Rather than speaking plainly through the lyrical content, the deeply enveloping story behind the Phantom gives the listener something more solid to stand on than merely one’s imagination while they take this sonic journey. Powerful vocals with equally powerful content and musicians already meshed and ready to strut their stuff, The Phantom Tomorrow will be enjoyed for many tomorrows to come. Ever the beacon of hope, the ‘Brides continue their legacy of stepping into new worlds with steadfast resolve, sure footing, and confidence in an industry where change is both expected and feared. The massive following Black Veil Brides has garnered over these years will rejoice, for the 21st century’s gods of rock have proven where they belong yet again.