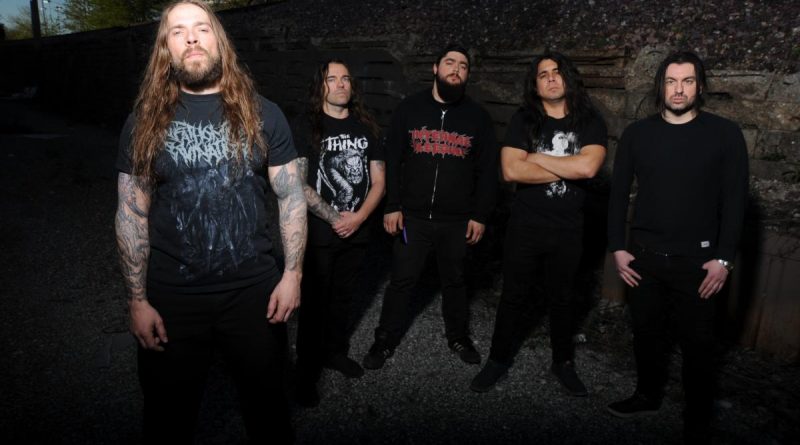 BROKEN HOPE is celebrating the 30th Anniversary of their debut album, Swamped in Gore, and in that spirit, will make their first-ever appearance at Pyscho Las Vegas this month, where they will join a lineup of esteemed artists at one of the US’s premier rock and metal music festivals. In addition to their appearance at Psycho Las Vegas, BROKEN HOPE will also join forces with legendary death metallers Devourment for two special concerts. “On behalf of BROKEN HOPE, we’re extremely excited to be appearing at Psycho Las Vegas,” says guitarist Jeremy Wagner. “This festival constantly brings only the best in metal and rock of all types and it’s an honor to play amongst such talent – and for the greatest fans. Thanks for having us, Psycho Las Vegas. Also, the Psycho-sponsored shows we’re playing afterward in both San Diego and Los Angeles are going to be unreal! We haven’t hit these markets in YEARS, and what’s even cooler is that we’re also being joined by the incomparable DEVOURMENT!!! These shows are gonna be sick! Last, we’ve been sitting around wondering if we were going to do anything really special to celebrate the 30th anniversary of our first album ‘Swamped in Gore’…yes, it’s 30 years old this year…and now, thanks to Psycho Las Vegas and these other Psycho-sponsored shows, BROKEN HOPE has a legit reason to celebrate with EVERYONE as we deliver to you all LIVE. See you all soon!”BROKEN HOPE live dates:8/22 – Las Vegas, NV @ Psycho Las Vegas at Mandalay Bay8/23 – San Diego, CA @ Brick By Brick (w/Devourment)8/24 – Los Angeles, CA @ Catch One (w/Devourment) Born in 1988, BROKEN HOPE was the brainchild of guitarist/chief-lyricist-songwriter Jeremy Wagner. Though Wagner was still attending High School, his passion and drive for bringing the band out of obscurity was apparent from the start. In 1990, BROKEN HOPE recorded two demo tapes which landed them a deal with the underground label Grind Core International Records. In 1991, BROKEN HOPE released their debut album, Swamped in Gore, which subsequently launched the band out of the underground and into the mainstream. Swamped in Gore was received well, going into three pressings in the first year. The production quality was fantastic for its time and Swamped in Gore is noted for being the first digitally recorded death metal album.  By 1993, BROKEN HOPE had signed with Metal Blade Records and the label re-released Swamped in Gore. BROKEN HOPE would release their second album, The Bowels of Repugnance, and continued on with writing and recording more albums for Metal Blade, including Repulsive Conception and Loathing. 1995’s Repulsive Conception reached CMJ New Music Monthly’s Metal Top 25 chart, as did the follow-up, 1997’s Loathing. The first four albums are stellar examples of the fury and sheer brutality possessed by BROKEN HOPE and are also the albums that etched BROKEN HOPE’s place in death metal history. The first decade for the band was filled with non-stop writing, touring and constant visibility with each album.  By the end of the ‘90s, BROKEN HOPE produced and released their fifth album, 1999’s, Grotesque Blessings. After North American and European tours, Wagner cleaned house and put BROKEN HOPE into “metal hibernation” in 2002. In 2007, BROKEN HOPE’s original Loathing lineup sat down face-to-face to discuss reuniting and doing a world tour. Due to personal scheduling conflicts, the guys were unable to make anything happen after this special meeting. On January 20, 2010, original BROKEN HOPE vocalist Joe Ptacek took his life. He was only 37 years old. Before his death, Ptacek met with Wagner and discussed the resurrection of BROKEN HOPE. With Ptacek’s death, Wagner wanted to bring BROKEN HOPE back in honor of Joe. In 2012, he resurrected BROKEN HOPE and vowed to make the band a full-time monster – forever. BROKEN HOPE made their long-awaited return to the realm of death metal on the highly successful Carnival of Death tour where the band was direct support for the mighty Obituary. BROKEN HOPE’s high-intensity COD live offerings received top-praise, and confirmed that not only was BROKEN HOPE back, they were also more rabid than ever. The band went on to perform at the 2013 editions of Extremefest (Germany) and Maryland Death Fest to stellar reviews which leads us to a new chapter in the annals of BROKEN HOPE. In 2013, BROKEN HOPE put pen to paper and signed a worldwide deal with Century Media Records. Their sixth album, Omen Of Disease, released in October 2013 release. Omen of Disease opened with a big first week, hitting #2 most added at US metal radio, nearly breaking into the top 10 at CMJ and with the track “Womb Of Horrors” added as a Flavor Track at Music Choice. Omen of Disease also dropped with nearly 1,100 copies sold in its first week of release.
BROKEN HOPE released their seventh studio album, Mutilated and Assimilated, in 2017. This album was their strongest, most critically-acclaimed release to date and has garnered new-perfect scores in Metal Hammer, Decibel, Kerrang!, Rock Hard, Spark and many more. In 2021, BROKEN HOPE is celebrating the 30th anniversary of their Swamped In Gore album and is also writing a new studio album and making limited/exclusive appearances in San Diego, Los Angeles, and at legendary festivals such as Psycho Las Vegas and Mexico Metal Fest. BROKEN HOPE DISCOGRAPHY:Studio Albums:Swamped in Gore (1991)The Bowels of Repugnance (1993)Repulsive Conception (1995)Loathing (1997)Grotesque Blessings (1999)Omen of Disease (2013)Mutilated and Assimilated (2017) EPs:Hobo Stew (1993) Live Albums:Live Disease (2015) Demos:Broken Hope (1990)Demo 2 (1990)Label Demo ’93 (1993) BROKEN HOPE is:Damian Leski – VocalsJeremy Wagner – GuitarsDiego Soria – BassMatt Szlachta – Lead GuitarsMike Miczek – Drums BROKEN HOPE online:www.brokenhope.comwww.facebook.com/brokenhopeofficialwww.instagram.com/brokenxhopewww.twitter.com/brokenhopeband