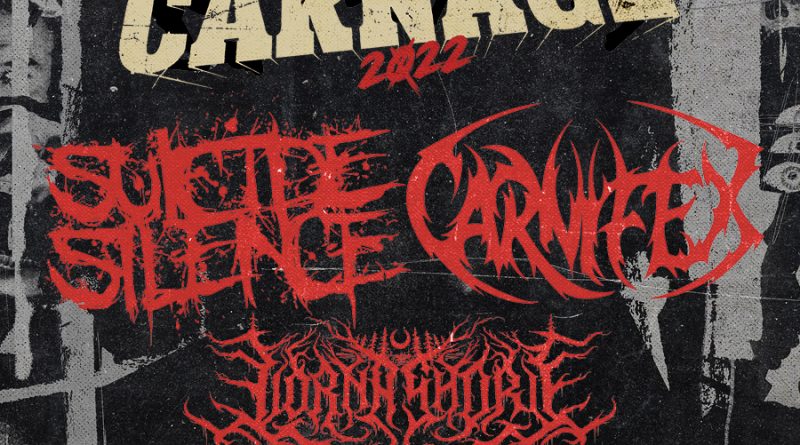 Doors at 4. The legendary Masquerade in the one and only Atlanta, GA. I’m in Heaven, ever so patiently awaiting the arrival of Hellfire. The wait is not long. From the first note to ring out of the speakers, a pit straight to hell opens up. My sister and I had attempted standing in line for a tour t-shirt, conveniently located on the direct back end of said pit to hell. Three sips into my first beer, it’s windmilled right out of my hand, the resounding crack of a full tall boy loud enough to be heard over the might of the first band of this evening, Distant. So it begins.

This humble writer has both attended and played many heavy shows, shows that opened pits and made heads bang from beginning to end. It’s a beautiful thing to witness and experience. Chaos and Carnage 2022 however… was different. If you, the reader, were/are lucky enough to attend a date this year, you will understand. Distant, based out of The Netherlands (fitting, hey?), is a 3-piece of pure brutality, the gigantic sound of which needs to be seen to be believed. Angelmaker followed, showcasing the best example I’ve personally ever seen of a group containing two full-time vocalists, in addition to 3 guitarists (one of which screams as well! What!). Despues esa, we had Signs of the Swarm continuing the absolute and ridiculous power of deathcore at its fullest, blastbeats and 808s continuing all through the night thus far with a revolving door of breakdowns and circle pits. To make it better, Upon a Burning Body, in all their Texas glory, came out and made you wonder how it could get better. They brought a child out for the entire crowd to sing “happy birthday” to, a boy whose presence at UABB’s ATL shows for years now has been a staple. True to the expectation, they absolutely made it better, bringing the entire crowd together for the seminal song each of us has sung our entire lives in a communal celebration of life and love of metal for all ages. “The stars at night/are big and bright” was sung by the entire crowd without any introduction, other than Danny Leal stating they had one more song to play and my goodness… even knowing what was yet to come seemed too good to be true following that performance. The legends that are Carnifex proved to the world that their respect is demanded, their tunes are revered, and their will be done. Dedicating a track in the middle of their set to the late greats Joey Jordison and Paul Grey of Slipknot, they ripped through a cover of The Heretic Anthem that made nonbelievers fall to their knees.

And now, for the reason I found myself lucky to be there and be a part of this momentous occasion, not enough can be said of Lorna Shore and Suicide Silence. This show was my introduction to live concert photography. I can’t explain how beautiful of a moment it was. Lorna walked out and ripped into a staple of the band’s catalog which, if you don’t know it, holds far more brutality live than on record (boastful maybe but no less true) – Immortal. Five seconds in and I knew my 3-song allotment to snap all the best pictures I could take would never be enough. The life-ending, soul-rending, mind-bending brand of metal Lorna creates flows from its members seemingly effortlessly. These men were built for one thing and it was on display in full force on this night and we were only in the first song! The title track for Will Ramos’s debut with Lorna Shore, …And I Return to Nothingness followed. I admit to having seen some live footage of this monster of an EP but I limit my viewing of such content when I know it’s music I must see live for myself. Not enough is said for bands that release music so brutal you can’t imagine it being better live, then obliterate what you thought you knew utterly and completely when you witness it firsthand. This is wholly accurate of Lorna Shore. Death Portrait closed my time of being up close and personal with Lorna and, though I knew I had a bird’s eye view from the upper deck of Heaven to look forward to, it was truly maddening having to walk away from my arm-distance of the photo pit. In an effort, I assume to make up for it, they blasted through their latest single, Sun//Eater immediately thereafter. Needless to say, it did the trick. Of The Abyss and To The Hellfire closed out the set on the gnarliest of notes, with the entire crowd holding their breath whilst Will delivered the snarling pig scream from Hell at the close of ‘Hellfire. A beautiful moment.

We could have ended the night on that note. I’m sure no one would have objected. But we still had Carnifex to get destroyed by and then the crown jewel of Chaos and Carnage 2022: Suicide Silence. They showed up in perfect form. With my spot up front opened up yet again, and an opportunity to capture the raw power of the legends therein, Mark Heylmun, Chris Garza, Dan Kenny, Ernie Iniguez, and Eddie Hermida reminded the crowd that night why Suicide Silence is a name that will always command respect. Coming out with the banger Unanswered from SS’s debut album The Cleansing, featuring David Simonich from Signs of the Swarm, the tone was set for imminent and total carnage. Pulling heartstrings four songs in, we saw Eddie introduce the last song the late (the great) Mitch Lucker, original vocalist of SS, wrote and dedicated it to the late (the magnificent) Trevor Strnad of The Black Dahlia Murder: You Can’t Stop Me. Folks. Moments like that remind us all that the world of metal is one big family and that, first and foremost, however brutal the lyrics and musical direction are, it comes from a place of love. Loving to be where you are, loving to be surrounded by people that love the music you do, witnessing your idols crush it onstage, and witnessing a room full of sweaty, tired, beat up fans give their all just to feel the music that’s touched their hearts over the years unfold before their very eyes… it’s a feeling that is irreplaceable. Suicide Silence, and the rest of the bands on Chaos and Carnage by extension, wear their love of their craft on their sleeves for all to see. There’s no half-assing a single note. It’s a sold-out crowd collectively losing their minds and a stage filled with the men who know exactly how to unleash the release we metalheads need. Never missing a beat or a note, Suicide Silence both showed the attendees they didn’t hold back for a second, but they did it with ease. They showed us why they belonged there, at the bottom of the bill in the place of honor and why every other band shouted them out with obvious reverence. Deathcore music’s flagship in its inception, and one of heavy metal’s favorite bands to ever do it, Suicide Silence is a group with the energy and performance every lover of metal needs to attend at least once in their life.

Thank you for making it this far! I know this world has made a lot of us accustomed to more instantaneous gratification. I write this review to illustrate the awe-inspiring power these bands and this genre have in their live setting. Any of us can stream any number of songs by any of these bands at any second. Seeing truly is believing. Witnessing the massive sound of Distant come from only three musicians casts them in an entirely new light. Witnessing the dual savagery of Angelmaker vocalists Mike Greenwood and Casey Tyson-Pearce will make you wonder why more metal bands don’t have dual screamers. Screaming harmonies? Got you fam. Layers of crunchy lows and crispy, banshee highs? No problem bro. The intensity of Signs of the Swarm is unquestionable. The pit couldn’t be big enough, the moshing couldn’t get crazy enough, David wanted total pandemonium and, by Jove, he got it! Upon A Burning Body (been on my bucket list a long time, thank you) showed you can still come out with a flat bill and an ear-to-ear smile and still absolutely wreck a venue with no questions asked. Carnifex’s Scott Lewis seems to toe the line between full-blown insanity and absolute lucidity onstage like a tightrope. Engaging, eccentric, exaggerated, and, dare I say it, “goddamn electric”, it was a privilege to witness. Every member of every band I met showed such humility, was so quick to smile and were some of the most encouraging people I’ve ever met. From onstage, Mark of SS told me to “get some good shots” during the calm before the set started after I divulged this was my first photography job. His first words to me after the show, through a huge smile in a bigger beard, were, “get some good shots?”. See if you can find the exact moment in the pictures attached. This review was specifically for Lorna Shore and Suicide Silence but each of these bands gave so much and shared such talent, I would be remiss as a writer and metalhead not to give credit where credit is due. Chaos and Carnage 2022, I tip my hat at thee. And to every reader that made it to the bottom, GO WATCH SOME LIVE METAL AND BUY THE DAMN T-SHIRT.

4 thoughts on “Beginning With Utter Chaos.. and Ending With Total Carnage”