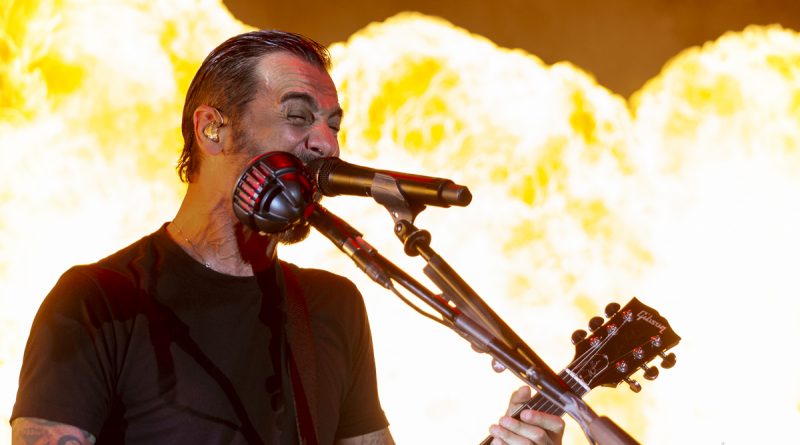 Bringing together a lineup that contains names like Godsmack, Wage War, Three Days Grace, Jelly Roll and so many more great names it would appear WJRR has done it again! Earthday Birthday 28 kicks off festival season for many Florida based metalheads and this year we kicked it off in style. As always the Central Florida Fairgrounds were extremely gracious hosts. So lets get into the crunchy details on the 28th installment of Earthday Birthday!

The early parts of the day kick off with some of our favorite independent acts including Circa Arcana who were among the bands who went out of their way to put on a show in the wake of Rebel Rock. As expected Circa Arcana delivered a bombshell set. Other independent sets include Living Dead Girl, The Convalescence and several more. Huge thanks to those independent acts, many of them traveled a long way on their own dime to play for us.

So now lets get into the bread and butter, the big names that put butts in seats (Figuratively speaking of course, nobody was sitting down at this fest). While he wasn’t first to hit the stage today the first performance to hit my mind is Jelly Roll. Known for his deep, personal songwriting Jelly Roll delivers both on and off the stage.  It is rare to see a rapper, especially one with a country twist perform well at metal fests but Jelly Roll seems to have found a niche that is demanding he be allowed a position. This isn’t surprising, while the music says country rap the stage show is all rock and roll. The summer is young and the touring cicuit is just starting, catch Jelly Roll on the road with Shinedown! You wont regret it!

As a Floridian and die hard fan of heavy bands I have to show some love to Wage War! I’ve talked in previous articles of mine about bands that make it hard to work because you want to cut loose and start headbanging. Wage War personifies that. A strong possibility that they were my favorite band of the day. Of course I’ll admit, given their Ocala roots I may be slightly biased. The entire show was nothing but hard hitting mosh pit fuel! High Horse, Death Roll, Low, Stitch and pretty much any other fan favorite you can think of was featured in this perfectly arranged set list.

Some other standout daytime acts include Ayron Jones who took fans to a blues/rock and roll heaven. Ice Nine Kills who delivered their always popular stage show (with costumes) to a catalog of great horror themed tunes. Fame On Fire who Jelly Roll called “The next big thing in rock music” and we certainly can’t disagree after the bone chilling cover of Linkin Park’s “numb” that was featured in their set. Motionless In White put down a performance that had fans going insane, mosh pits, crowd surfers, the whole nine yards, I could write a whole article on their performance alone. Of course Black Stone Cherry was in the mix as well and packed a huge punch showing why they are loved by festival goers!

As we moved into later performances names like Thrice, Black Veil Brides, Three Days Grace and Godsmack would dominate the stages. Thrice brought fans back in time and showed that they can still get the crowd moving. Really an incredible show from them and there was no shortage of fans flocking to the “Turn It Up Stage” to witness it! Black Veil Brides actually came through with 2 sets at Earthday Birthday 28. An acoustic set indoors at the wonderful Central Florida Fair grounds facilities and another full throttle set on the main stage. Stellar performances on both accounts!

When Three Days Grace took the main stage there was absolutely zero doubt that we had gotten to the co-headliners. As they have always done, Three Days Grace took fans on an emotional roller coaster ride. With a set list that took from every era of their discography to boast songs like Never Too Late, Riot, The Mountain, Painkiller…. the list of sonic sensations goes on. It goes without saying that Three Days Grace means a lot to fans and even the blind can see why.

For this year’s headliner Earthday Birthday 28 featured a MINDBLOWING set from Godsmack. Fit with all the bells and whistles. Pyro, huge lighting rigs, and an enormous wall of sound. On top of all this Godsmack ran a setlist that made it impossible to stop moving. Everything a Godsmack fan, neigh, a metal fan could want in a show. They really took it to 1000hp pun fully intended. If you are a Godsmack fan to any degree this show had something for you. From opening with “I Stand Alone” to a bone cracking performance of “Cryin Like A Bitch” and the eerie rhythms of “Voodoo” Godsmack had it all. It is true beyond a shadow of a doubt that Godsmack has cemented themselves into legendary status. Their show at EDBD 28 put that on full display.

Thank you to 101.1 WJRR, IHeartRadio, Earthday Birthday, all the bands, the fans, vendors and staff for making EDBD one for the books! Without all of you the music world stops moving.